Pearl went to the Canadian National Exhibition (CNE) in Toronto and tried some of the fun and innovative food trends. Here’s what our group of 4 taste testers thought:

The use of pickles was an unexpected trend we could get on board with! We tried the two most unique menu items featuring pickles: pickled pizza and pickle lemonade. The pickled pizza was a homerun for 3 out of 4 of our tasters! Layers of cheese, dill ranch sauce, and crunchy dill pickles on a perfectly chewy crust made us appreciate this dish – it isn’t just pickles thrown on top of a traditional concession stand pizza. This was a favourite and something we’d love to see available year round in Toronto! Average 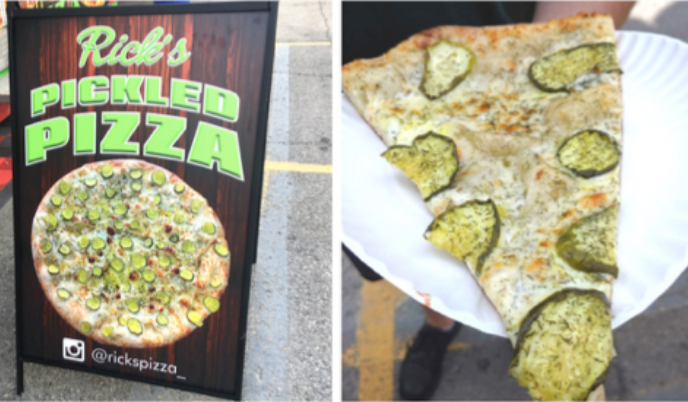 “How have I lived my life without pickled pizza? I can’t go back now!”

On the other hand, the pickle lemonade was underwhelming. The appearance of dill in the cup was misleading as sweet pickles were used in the lemonade, not dill pickles. The overall taste was a slightly briny lemonade with a tiny hint of pickle. Most of our tasters found it drinkable, but not necessarily enjoyable!

“Bleh, this isn’t for me. It’s just like salty lemonade. I’d rather it be extremely pickle forward than this in-between taste.” 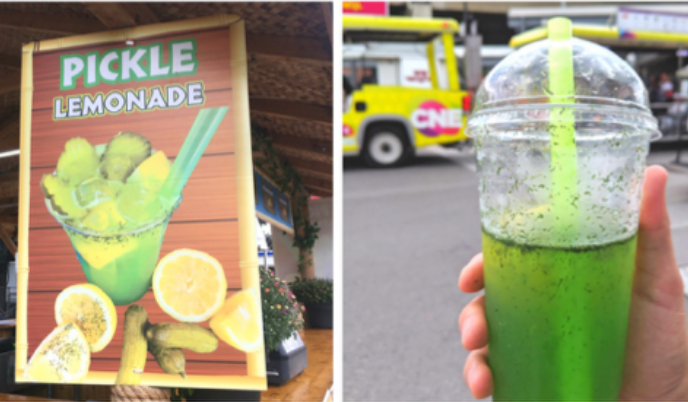 Desserts with a Kick

The CNE is always famous for its unique dessert items – and this year was no exception as popular spicy condiments were making their way into desserts.

First up were the Peanut Butter Sriracha Bites from Fran’s. These were mini donuts fillled with peanut butter sriracha, and topped with vanilla ice cream and chocolate sauce. While the sriracha flavour was masked by the peanut butter, a nice kick came through! It was reminiscent of the spicy peanut sauce you would find in a Thai dish, however the vanilla ice cream and sweet dough helped kept it grounded in the dessert category. We’d love to see this innovative flavour combo pop up in other donuts or desserts!

Taster quote: “I’m into this flavour combination. Maybe a bit less dough and more filling would be nice, but overall it’s really good! The ice cream helps tone down the spiciness after you’ve had a few bites.” 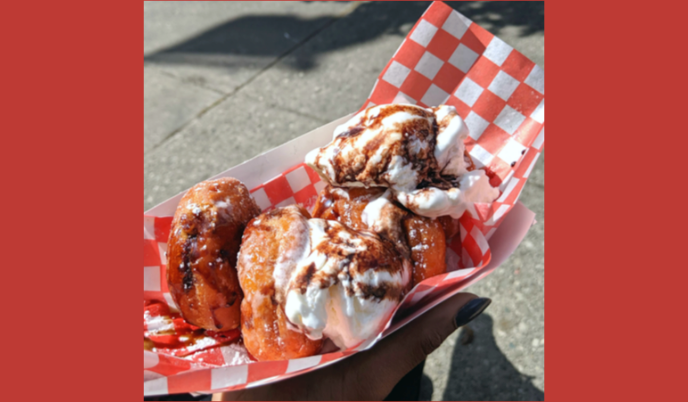 Next we tried Black Halo’s vanilla soft serve with wasabi topping. The mix of spicy wasabi and cooling sweet cream was a great combination, however we wished it was mixed throughout the ice cream rather than just dropped on top. While it definitely delivered an extreme wasabi hit to the nose, but it quickly overwhelmed your taste buds to the point where it became an unpleasant experience! Average Pearl Taste Taster

Writer’s note: The next day when we saw Wong’s Ice Cream & Store in Toronto’s east end also had a Wasabi Honey flavoured ice cream we decided to try it out for comparison… and it was everything we hoped for! The wasabi flavour was blended nicely and gave that familiar burn but toned down in a very pleasant way. If you’re looking to try a more toned down Wasabi ice cream (along side a number of innovative flavours like Ramen Miso and Pineapple Cilantro) we’d recommend checking out Wong’s!

Beyond Meat
Given that plant-based meat substitutes have been a hot topic in 2019, we weren’t surprised to see Beyond Meat at the CNE. Bub’s Beyond Burgers offered 5 differently topped Beyond Meat burgers – right beside their original Bub’s Burgers stall.

We opted to go with Bub’s Beyond Original to focus on the patty rather than the toppings. Overall, it was palatable, but it wasn’t fooling anyone into thinking it was real meat! Our tasters agreed that it lacked the smoky char of a beef burger – something that The Works executed well with their Beyond Meat burgers. Bub’s Beyond Meat patty looked and tasted liked it had never touched a grill, and was too soft and mushy to pass as meat texture. Compared to other veggie burgers this was an acceptable option, but compared to beef burgers, it was clearly substandard.

Taster quote: “I’m not mad at it, but it’s far from being a beef burger substitute for me as far as taste and texture goes.” 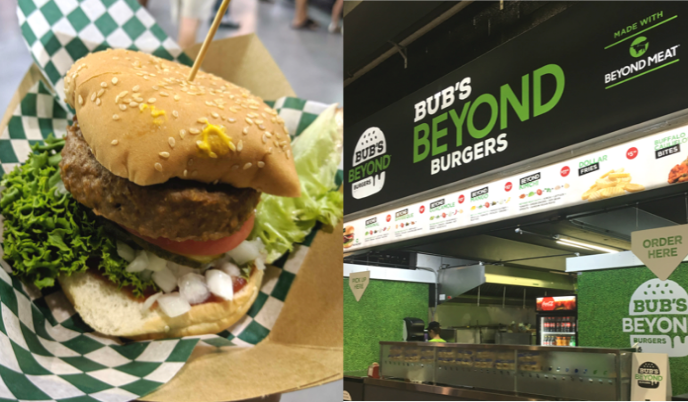 A few other things we tried at the CNE this year:

The Krispy Kreme Burger from Epic Burger was exactly what you’d expect – impossible to hold without making a greasy mess, but indulgent and addictive! The burger patty was flavourful, the toppings were fresh, and the donut buns provided a familiar sweetness.

Average Pearl Taste Taster Rating: 8/10
Taster quote: “This lived up to the hype… so good!” 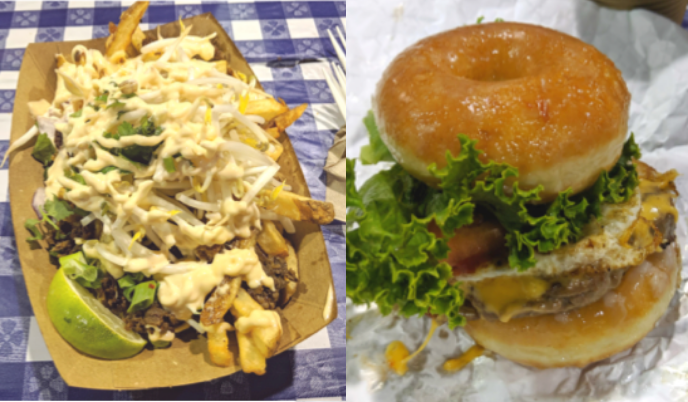 Supa Fry offered an appetizing menu of fries inspired by popular Asian dishes like Pho, Bulgogi, Pad Thai, Kimchi, and Shrimp Curry. We tried the Supa Fry Pho Fries topped with beef, cilantro, onions, lime, bean sprouts, and sriracha aioli. While it’s hard to truly capture the Pho flavour without the delicious broth, we thought these were a delicious and surprisingly light alternative to your classic poutine or topped fries.

Average Pearl Taste Taster Rating: 7/10
Taster quote: “The taste doesn’t scream Pho to me because of all the sriracha mayo, but it’s still tasty and I’ll definitely finish it.” 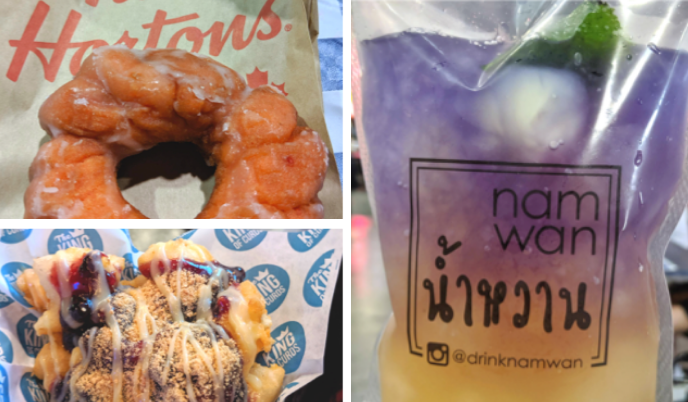 We were hopeful that Tim Hortons would have some exciting donuts inspired by their new Innovation Café, but we found the Tim Hortons Red Licorice Donut to be a let down. Three out of the 4 tasters thought it had a strange chemical taste that wasn’t red licorice! It was one of the most affordable food items available, so give it a try and see what you think.

This Lychee Butterfly drink from Nam Wan was not just beautiful; it was also sweet, fruity, and refreshing. Perfect for walking around the CNE with on a hot summer day!

Average Pearl Taste Taster Rating: 8/10
Taster quote: “Yum this is exactly what I was hoping it would be – refreshing and lychee!”

You can’t go wrong with deep fried cheese curds! We tried King Of Curds’ “Cheesecake Curds” topped with blueberry filling, cream cheese icing, and graham cracker crumble. These were a wonderfully sweet addition to their menu and 3 of our tasters really enjoyed them. Our only suggestion would be to amp up the cheesecake flavour with more cream cheese to better reflect the name, but nevertheless we still devoured them!

Last but not least, we had to try out the CNE’s most famous item on Instagram – the Rainbow Grilled Cheese! Ours wasn’t grilled long enough deliver the super long cheesy pull we’ve been seeing online, however it definitely delivered on those vibrant colours! It had an unexpected slight sweetness to it that was a pleasant surprise.
Average Pearl Taste Taster Rating: 7/10
Taster quote: “It’s nothing to write home about taste wise, but it’s a fun novelty to try!”

Overall, the CNE continued to deliver on the fun and innovative food offerings we’ve come to expect! While it’s a great opportunity for fun and experimentation, it’s also a great way to observe how receptive consumers are to new and innovative flavour combinations.

The CNE continues in Toronto until September 2nd.